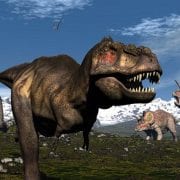 There is increasing evidence that the impacts of meteorites have had important effects on
Earth, particularly in the field of biological evolution. Such impacts continue to pose a
natural hazard to life on Earth. Twice in the twentieth century, large meteorite objects are
known to have collided with Earth.
If an impact is large enough, it can disturb the environment of the entire Earth and cause
an ecological catastrophe. The best-documented such impact took place 65 million years
ago at the end of the Cretaceous period of geological history. This break in Earth’s
history is marked by a mass extinction when as many as half the species on the planet became
extinct. While there are a dozen or more mass extinctions in the geological
record, the Cretaceous mass extinction has always intrigued paleontologists because it
marks the end of the age of the dinosaurs. For tens of millions of years, those great
creatures had flourished. Then, suddenly, they disappeared.
The body that impacted Earth at the end of the Cretaceous period was a meteorite with a mass
of more than a trillion tons and a diameter of at least 10 kilometers. Scientists first identified this
impact in 1980 from the worldwide layer of sediment deposited from the
dust cloud that enveloped the planet after the impact. This sediment layer is enriched in
the rare metal iridium and other elements that are relatively abundant in a meteorite but
very rare in the crust of Earth. Even diluted by the terrestrial material excavated from the crater,
this component of meteorites is easily identified. By 1990 geologists had located
the impact site itself in the Yucatán region of Mexico. The crater, now deeply buried in sediment,
was originally about 200 kilometers in diameter.
This impact released an enormous amount of energy, excavating a crater about twice as
large as the lunar crater Tycho. The explosion lifted about 100 trillion tons of dust into
the atmosphere, as can be determined by measuring the thickness of the sediment layer
formed when this dust settled to the surface. Such a quantity of material would have
blocked the sunlight completely from reaching the surface, plunging Earth into a period
of cold and darkness that lasted at least several months. The explosion is also calculated
to have produced vast quantities of nitric acid and melted rock that sprayed out over
much of Earth, starting widespread fires that must have consumed most terrestrial forests
and grassland. Presumably, those environmental disasters could have been responsible for
the mass extinction, including the death of the dinosaurs.

Several other mass extinctions in the geological record have been tentatively identified
with large impacts, but none is so dramatic as the Cretaceous event. But even without
such specific documentation, it is clear that impacts of this size do occur and that their
results can be catastrophic. What is a catastrophe for one group of living things, however,
may create opportunities for another group. Following each mass extinction, there is a
sudden evolutionary burst as new species develop to fill the ecological niches opened by
the event.
Impacts by meteorites represent one mechanism that could cause global catastrophes and
seriously influence the evolution of life all over the planet. According to some estimates,
the majority of all extinctions of species may be due to such impacts. Such a perspective
fundamentally changes our view of biological evolution. The standard criterion for the survival
of a species is its success in competing with other species and adapting to slowly changing
environments. Yet an equally important criterion is the ability of a species to
survive random global ecological catastrophes due to impacts.
Earth is a target in a cosmic shooting gallery, subject to random violent events that were
unsuspected a few decades ago. In 1991 the United States Congress asked NASA to investigate
the hazard posed today by large impacts on Earth. The group conducting the
study concluded from a detailed analysis that impacts from meteorites can indeed be
hazardous. Although there is always some risk that a large impact could occur, careful
study shows that this risk is quite small.

3. Which of the following can be inferred from paragraph 3 about the
location of the meteorite impact in Mexico?
a. The location of the impact site in Mexico was kept secret by
geologists from 1980 to 1990.
b. It was a well-known fact that the impact had occurred in the
Yucatán region.
c. Geologists knew that there had been an impact before they knew
where it had occurred.
d. The Yucatán region was chosen by geologists as the most
probable impact site because of its climate.

4. According to paragraph 3, how did scientists determine that a large
meteorite had impacted Earth?
a. They discovered a large crater in the Yucatán region of Mexico.
b. They found a unique layer of sediment worldwide.
c. They were alerted by archaeologists who had been excavating in
the Yucatán region.
d. They located a meteorite with a mass of over a trillion tons.

5. The word “excavating” on line 25 is closest in meaning to
a. digging out
b. extending
c. destroying
d. covering up

6. The word “consumed” on line 32 is closest in meaning to
a. changed
b. exposed
c. destroyed
d. covered

7. According to paragraph 4, all of the following statements are true of
the impact at the end of the Cretaceous period EXCEPT:
a. A large amount of dust blocked sunlight from Earth.
b. Earth became cold and dark for several months.
c. New elements were formed in Earth’s crust.
d. Large quantities of nitric acid were produced.

9. The word “perspective” on line 46 is closest in meaning to
a. sense of values
b. point of view
c. calculation
d. complication

11. Which of the sentences below best expresses the essential information in the
following sentence?
Earth is a target in a cosmic shooting gallery, subject to random violent
events that were unsuspected a few decades ago.
Incorrect choices change the meaning in important ways or leave out essential
information.
a. Until recently, nobody realized that Earth is exposed to
unpredictable violent impacts from space.
b. In the last few decades, the risk of a random violent impact from
space has increased.
c. Since most violent events on Earth occur randomly, nobody can
predict when or where they will happen.
d. A few decades ago, Earth became the target of random violent
events originating in outer space.

12. According to the passage, who conducted investigations about the
current dangers posed by large meteorite impacts on Earth?
a. Paleontologists
b. Geologists
c. The United States Congress
d. NASA